So sorry to say this, especially since I've been dreadfully unfaithful in posting daily this past few weeks, but I am taking a small break from this blog.  The trouble I have been having sleeping lately, a week long trip I am leaving for in the morning, and a few other things in life have caused me to realize that this a very good time to step back.

Many times in the past I will faithfully press on, trying to finish a project, and halfway through I realize that I've been doing it for the sake of doing it, not for the sake of any benefit it might have for myself or anyone else.  In those times I have taken a break, and started up again, fresh and full of new enthusiasm for the true purpose of those projects, and any others; to glorify God.

I feel that a break is due, even though I feel partly guilty in taking it, and I will be back in a week or two, hopefully with less mournful posts than have been posted recently.

I love you all dearly and continue to keep you in my prayers.

She built a house, unsure if it was on sand or rock; insecurity and doubt hindering each stone she stacked.  Should she place this one there, or hold it back?  Should she check harder, for sound footing?  Should she give up and tear the whole thing down, or just continue stacking?

It was all new territory for her, and it was wonderful most of the time, but worries and concerns still pushed their way between she and the stones she was stacking.  She had held off building her whole life, knowing it wasn't the right time, and now she wasn't sure if it was or not.  It felt too beautiful, the stones too grand... was it right?


She would stop worrying at all, and stack a row or two of beautiful, smooth stones, and then she would stop, in shock, wondering if she ought to have done that.  She was having to analyze everything she did, trying to be wise, but not fearful; trying to feel if the ground was sturdy or not, but not trusting her senses.


Apparently building a house is harder than it sounds.

P.S.  Okay, I know it sounds rather petty and unimportant, but I would love it if you guys would continue to pray for me sleep.  I have continued to sleep poorly, and it is really starting to take its toll on me.
I would love to be in prayer for you all, as well!  Please feel free to contact me any time, I love hearing from you.
Blessings!

She had always interpreted this passage as, "don't worry about what you eat or wear because it doesn't matter at all anyway, and it'll get taken care of."

How dreadfully wrong she was about it.  Slowly she has started to understand that this passage isn't saying these things don't matter, but rather that they do.

The Old Testament is full of laws about the smallest, minute details of people's lives; the tassels on the priest's  robes, the measurements of the tabernacle tent, which parts of sacrificed animals go where.  God cares about things in our lives that seem dreadfully small and insignificant.

She had selfishly been hoping for another summer dress or two.  Silly, yes, but she really wanted some.  She had felt, though, that it was too frivolous an issue to actually pray about it, so she didn't.

Well, for some reason God cared about her silly summer dresses.  She had finished a day of work and was picked up by her mom and whisked off, rather begrudgingly, to her sister's eye doctor appointment.  On the way to the next stop she asked if she could be dropped off at the GoodWill, rather than sitting through a hair appointment.  She didn't actually expect to find anything, but piled clothes into her arms just for the fun of it.  After trying on about a dozen articles of clothing, she left the store with two pretty, comfortable summer dresses that fit her perfectly.

God had the entire thing planned out.  It seems insane, but He cares about those dresses.  Similarly, He cares about everything in our lives, no matter how small or insignificant it may seem.

P.S.  Thank you so much for your prayers, I slept wonderfully last night.  Here's hoping that won't be a one-time thing!  Blessings!
2 comments:

She hadn't slept well in at least a week.  Her mind was too busy at night, and it took her a couple of hours just to fall asleep.  Dreams then plagued her all night long, and she tossed and turned the entire time.  In the early morning she woke up every ten minutes from about five o'clock on.

Finally each morning she rolled out of bed and turned her alarm off, because she didn't need it.  There were times during the day that she felt drowsy, and even dizzy, but somehow she pushed through work days and still had a little bit of energy left for the afternoon.

Why she even set the alarm, she wasn't quite sure; she didn't need it.  She did realize, though, that she couldn't make it without God.  Again and again she has had to learn this lesson, and again and again she forgets it.  This time around it wasn't quite as obvious, but thinking back, she realized that she could not have made it through the week without her Savior sustaining her.  Multiple times she felt dizzy enough that she was a bit frightened.  Multiple times she couldn't think straight.  Multiple times, while trying desperately to fall asleep, she wanted to cry.

And He sustained her.

On top of that, He continued to wake her before her alarm.  It's silly, but she hates waking to an alarm, and He knows this.  He is allowing her to wake naturally, without the near heart attack that an alarm causes, and is giving her extra time to spend with Him each morning.

And so the alarm continues to be set, and turned off before making a sound.

P.S.  While this is a great lesson, I would still definitely appreciate your prayers... I could really use a good night's sleep.  Blessings!
No comments:

They say every cloud has a silver lining.  The problem she often encounters is actually seeing this mysterious silver lining.  She has been in the midst of a dark, all consuming storm.  The clouds surrounded her and she could see nothing of the sun.  Light was blocked out and rather than chasing the storm away and searching for the bright side, she wallowed in it.

The sun is out again, and she sees each cloud from a changed perspective.  She sees now that the clouds she just trekked through have glorious silver/gold edges... shining a hopeful light on her life.

Yes, the storm was hard, the clouds were thick, the idea of a silver lining seemed almost laughable at the time, but hind-site is 20/20.  How almost beautiful that storm seems now.  She has been drastically changed by it, and is closer to her King for it.  While she was in it, all she could see was the darkness, but now she is nearly blinded by the glorious silver lining.

How dreadfully lacking in perspective she is so very often.

She wished she were in the lighthouse.  To be able to see all around, even in the storms, and to spread light in such a noticeable way; how glorious that would be!  She was sitting in a small boat, being tossed around on waves that she never could have expected, and she saw a streak of light across the sky, on and off, on and off.

She saw the lighthouse, but wished that she were there already.  She wanted to get out of the boat and climb the stairs of the beacon tower.  She longed to leave her storm and better help other people through theirs.

What she had failed to acknowledge, though, is that there is a lighthouse.  She had been so focused on wishing she were in its safety, out of and away from the tossing of this storm that she had almost forgotten that there is someone not only in the lighthouse, but there is someone who is the lighthouse.  And He knows what is best, even when she lacks the perspective to see it.  He stands firm in the calm and in the storm, and He is never shaken by the storms that shake her.

They set out walking along the road, talking, laughing, hoping to reach the top of the hill before the sun was lost behind the mountains, but not trying too hard.  Having accomplished their goal, they stood at the top, looking at, but trying not to look at, the sun.

The trees took on a sheen; an ethereal, resplendent, almost unearthly light.  Feeling the golden beacon penetrating her soul, she was warmed from the inside out.  Standing in the presence of such glory was breathtaking.

She felt a gripping, almost smothering sense of the presence of God.  Surrounded by the inconceivable beauty that is the sun, she could not help but think that even this splendor was nothing in comparison to the beauty and majesty of the Son of God.

In just a moment, the sun was gone.  That quickly the spell was broken, and she understood.  She understood that we have these moments of splendor only for a moment because life itself only lasts for a moment.  The beauty of the hills illuminated by the setting sun will someday be gone forever.

And we won't miss it.

P.S.  So sorry about missing a couple of days there.  I've been busy, but this is supposed to be an object every day... not just when I feel like it.  Love you all!

The circle has no beginning and no end, so why is it that a wedding ring is a circle?  Naturally it stays on the finger best that way, and of course there will not be (or ought not be aside from death) an end, but every marriage has a beginning.  As someone who sees an analogy hiding in every object, she had to dig deeper; she had to think it through.

Maybe marriage doesn't have a beginning.  Maybe, since before time existed, God had he and she in mind for each other.  Yes, the marriage itself has a beginning, but the idea never did.  The idea was there before the people ever took their first breaths... a beautiful, masterfully written love story.

How stunning.  How breathtaking an idea.  We cannot even wrap our minds around it...and yet we try to because it is so glorious.

And so, too, is our love story with God through Christ.  Yes, the fall did happen, there was a beginning to separation with God.  Yes, Jesus paid the price, there was a beginning to reunion with God... but the ideas were always there.  There has never been an instant when God was not thinking about the marriage that will be ours.  The story is not even complete yet; the marriage has not yet begun, but the idea was there before the line of time was ever penned.

It is eternal, with no beginning or end.  The ring is symbolic, the analogy does hold up, the picture is beautiful. 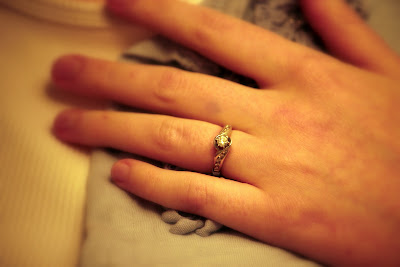 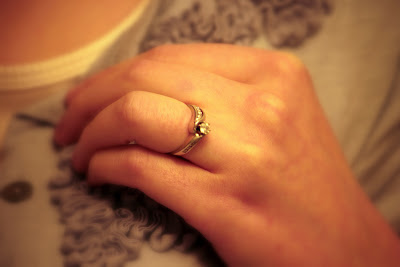 P.S. I finally did it, Tianna!  I hope this was satisfactory. Thank you for letting me use photos of your beautiful ring! <3
6 comments: 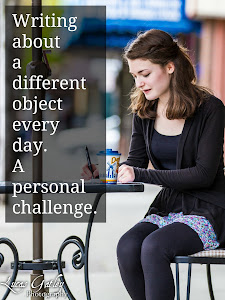